JUNE...so much MORE than a month

<>
Author's note: Due to severe winter storm warnings in the mountains, this may be my last blog for a while.

I remember having a family in my days as a NICU nurse whose children had names of the months. They had an April, May , JUNE, August and November. They were a very tight knit Hispanic family and when I met them is was when little Octobre was born . He was a little pint of a fellow weighing about 2 1/2 lbs at birth, so he had an extended stay in the NICU as he grew and matured.
I always thought it was a bit strange that they named their children after months, because I couldn't imagine doing that to my kids. Umm hello Todd...your name is now April. I think he might have killed me.
Now I could see naming a girl June if she was born in that month. In fact, I have 2 very dear friends named June . But the other months...I don't get it. Must be something in their culture.
But I do love the month of June!! I graduated from college in June, got married in June and had my first daughter in June. So it really is a month full of memories for me.
But when I think of "June", I usually think of my dear friend, mentor, spiritual mother, adopted mother and wonderful adopted grandmother to my kids.
My friend, June Hoch Clodius, has been one of my life's greatest and profound blessings.
I met she and her then husband Carl, right after I had my first baby, Kristi.
They were a couple at our church, they were involved in Young Life and I had absolutely no idea, when I met her , that she would become so so important to me thru my adult life.
When I met her, June had recently undergone surgery, radiaton and chemotherapy for breast cancer. She was a survivor and would go on to survive another bout or two of the awful cancer.
But she and Carl probably saw something in Scud and I that they thought might need some help..or some coaching, or something.
We quickly got to know each other. I asked June if she would disciple me. Ok now that i write this, I notice my own lack of sensitivity. She is just recovering from the ordeals of cancer and I ask her to help me...seriously Missy, what were you thinking?
But she said YES and from that moment on, she became to me the person I could share anything with. I went to her for advice on EVERYTHING. From how to be a better wife (we did a bible study on how to the wife of a happy husband...did it work , Scud?), how to handle toddler tantrums, how to pray for my children.
She has been a source of strength, comfort and hope to me thru some very troubled times in my own life.
Not that I was always completely self indulging. I think because of my deep love, respect and honor for her, I have been there for her too, during some of the hardest moments in her life too.
We have shared births, deaths and everything in between. I rejoiced with her when Cynthe and Kevin got married, and when all 3 of her grandchildren were born. And she was there for me during the times when I needed a mom right after both Katie and Todd were born.
And not only was she there for me, but my kids truly believe she is "Gramma June". Because we live so far from Scud's mom, she has been the grandparent at baseball games, musicals, graduations and any other big event in each of my kids lives.
IN both Kristi and Katie's wedding, Gramma June was escorted as a grandmother right before I was seated as the mother of the brides. She deserved just as much a place of honor as Scud's mom did.
Last year in june, my June celebrated her 80th birthday. for weeks I wondered what I could do for her. there was absolutely nothing she needed and if she did, dear Jerry would have gotten it for her long before i did. So all I could really think of was to write her a letter of how much she meant to me. Words could never adequately express that but I tried. What has blessed me the MOST about our friendship is that repeatedly over the many years, she has ALWAYS pointed me to Christ. To show me that HE would always be there for me, that HE had the answers when I had none. That JESUS was the HOPE for me to cling-that I would never be hopeless.
I know that June has prayed for me faithfully for years and has helped me grow in areas where I needed to most. 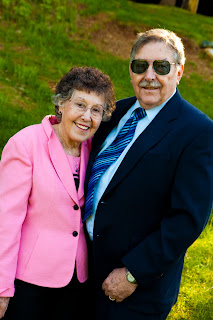 I was reminded again today of how my life has been enriched by June's friendship as I chatted with her on the phone. I have been blessed beyond measure because of her presence and friendship in my life. I pray for June and Jerry daily, I pray for her dear Kevin too.And I pray that someday God will allow me to be a "JUNE" to some young woman starting out in life as a newlywed or young mom...because we ALL NEED A JUNE in our lives .May you be blessed to have someone like her in your life.

Email ThisBlogThis!Share to TwitterShare to FacebookShare to Pinterest
Labels: Friends