This will be a very hard blog to write but one that I need to so that I can process thoughts and feelings and questions that are in my mind. I imagine that some of you who read this are experiencing some similar thoughts.
I was awakened on Thanksgiving night and received the news that Robby Paine had died.
I couldn't believe it.
Surely this was a mistake.
But NO, it was a horrific reality.
My vibrant, fun loving, lover of people friend Robby, was gone.
My dearest friend in life had lost her youngest son.
Our family's BEST FRIENDS had lost their precious Robbo.

This is seriously WRONG.
As most of us who knew Robby were, our minds were flooded with questions as to why and how. And one of the hardest things to process is that we might likely never know what happened.
As I write that, my first thought now is: Is that really the important thing? And NO, it isn't. What is most important is that we who are left behind will now live out our lives without Robby. And that's what hurts; that is what sucks.

Robby was my birthday buddy. Its the name we both came up with for ourselves. Although our birthdays were a day apart, we were still birthday buddies. When MaryKay was pregnant with him, she knew she would have a C Section and with the due date she had, she asked her doctor if he could be born on September 15. The nerve of that man to say it was his day off! So instead Robby was born on September 16, 1988. Our whole family was so excited to meet the newest Paine that I took all three of my kids out of school and we were at the hospital when he was born.
So Yes, I am one of the privileged few to say that I knew and loved Robby his entire life. And that is a priceless, precious gift I have been given.
I have so many stories and memories of Robby from his growing up years. I loved him thru his chubby years ( Paine loves chocolate) to watching him slim down and become a dynamite volleyball player. I am remembering gifts I have given him over the years and how my daughter Kristi was the one who gave him presents at our annual Christmas Eve gathering. With Todd and Tommy best buds, and Katie and Kelly as well, Kristi was left with Robby who was ten years younger than her to trade gifts with. She delighted in the fact that Robby was her partner in this annual tradition.
I cherish and relish the fact that both my daughters, believed that the Paine's were truly their family, and they both had Tommy and Robby in their weddings as ushers. Neither of them would have gotten married without those two being involved. And of course Kelly was a bridesmaid for Kristi and she was Katie's Maid of Honor.

As many of us have our memories of Robby, I have been overwhelmed with how many friends have stated that he was their best friend and made everyone feel special and loved and valued. Truly Robert Allen Paine was indeed a very special gift to all of us.
His smile could light up a room. His smile is something we always will remember. Even when he was late (aka "Paine time"), he would smile and try and get away with it. He made people feel so special. He was truly "present" with you when you were with him.
Gosh how he could make me laugh. And his humor-so great.

For quite a few of Robby's friends, they may or may not know that he had a spiritual side to him. As a young boy, Robby asked Jesus to come into his life and be a part of his life forever. There were times of tremendous growth in Robby's relationship with Jesus. What a privilege it was for Scud and I to be a part of that aspect of Robby's life as well. I remember vividly going to his house on East 1st in Chico at finals time and telling him this was the year he was going to be on Summer Staff at Woodleaf. I remember him telling me " I need this", and we began to fill out his application together.
And so he first served on team 609 , aka sick with swine. How many of you became friends with Robby then? and how grateful are you for that? And then he came back for the August session that year. The next year he worked at Woodleaf on the weekends and the summer of 2010, he was one of our Interns that served the entire summer. What a tremendous group those Ninterns were!! I love them dearly.
It was that year when Robby really decided to pursue Jesus Christ again and he was in a bible study (scudlife) for 2 years with Thomas and Will and Scud.
So for me, saying goodbye to Robby really isn't goodbye. It is most definitely, "I'll see you again".
For me, for his family, for my family and for many of his friends, we know with complete assurance that we will see Robby again in heaven. That we will spend eternity with him. Which means FOREVER.
For whatever time I have left on this earth, I will not see Robby. But I will see him again and I will get one of his hugs again and live forever with his smile.
Some of you didn't know the spiritual side of Robby. Some of you might question that side and wonder how could that be. You might have seen him drink too much, do certain things that didn't seem "christian like".
But the truth is, that doesn't matter.
Every single person that has ever walked the face of this earth has sinned. All except Jesus Christ, and He is God's son.
Sin is basically choosing to be the god of your life. Doing what you want to do and not caring if there indeed is a real GOD.
I know there is. Robby knew there was.
Robby, like alot of us, realized that there was something more to life that just what meets the eye. That there was a "higher power".
Robby believed that Jesus Christ was the son of God and that He came to earth for the sole purpose of taking on our sin so that we too, could have a relationship with God.
This might be alot to take in right now, especially as we are grieving so and our hearts are broken. What I do know for absolute certainty is that Robby is in heaven with the God he loved, and that he would like you to be there too.
The MOST famous verse in all of the bible is John 3:16.
It says:
For God loved the world so much that He gave His one and only Son, so that everyone who believes in Him will not perish but have eternal life. (New Living Translation)

This is what Robby believed. He believed in Jesus. He believed that he was the Son of the Most High God. He believed that Jesus died on a cross so that he (and me and you) would be able to live with God thru all eternity.
One day- who knows when that will be - I will see Robby again. I will see spend eternity with him, with Jesus.
Both of our prayer is that you will as well.
If you have any questions about this, please don't hesitate to get in touch with me (melissa.scudder@gmail.com).
I love you Robby Paine. Always have. Always will.
I miss you deeply but look forward to your smile and hug. 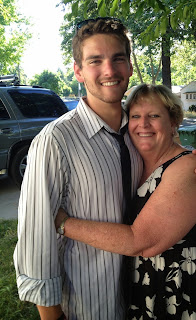 Email ThisBlogThis!Share to TwitterShare to FacebookShare to Pinterest
Labels: Loss