Today was a day filled with mixed emotions.
I went to the memorial service for my dear friend Amy's dad.
It was more a celebration of his life.
Wade was a man who loved deeply and forgave quickly. That was the message spoken over and over about him today. I wish I had known Wade better. He cared for others so deeply and the MOST important people to him were his family. He loved Kathy from almost the minute he laid eyes on her and loved her so well for over 43 years.
He loved his children enormously and taught them to love others just as he did.
I remember from the very beginning of my friendship with Amy how impressed I was with how she cared for people and made them feel so special. She learned this from her dad. He was her role model. 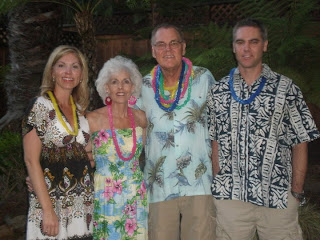 The Pastor today was from Wade's very small church in the Almaden area of San Jose. this was the very same church that Wade's grandmother helped to found. Jordan told us that Wade had told him sometime during his 15 month battle with cancer that he did not want to wast a single moment of his life and that it would be a shame if he did.
I wrote that down on the program because that's what I want to do.
I want to love people as well as Wade Douglass and Katie Parsons May did.
God took both of them to their eternal home a little bit too early for me. But I truly believe that God knows what He is doing. And that its ok for me to question and ponder. And like I wrote in an earlier blog, I need the reminder that this earth is NOT my home...this is where we pass thru a number of years that only God knows how many...until we reach our REAL destination- Heaven...where we will spend eternity with Jesus; free from all the trials of life on earth.
Because of Katie's life and Wade's life, I have been so challenged these past 3 weeks to change how I love and view others.
This morning I was reading my bible in the book of 1 Samuel. Its the story of King David. Actually 1 Samuel is the story of before David was king. He was the armor bearer for the first king of Israel, Saul.
But Saul disobeyed God's command and lost favor with Him and then the Lord appointed David to be the next king.
Saul became obsessed with getting rid of David. Unfortunately, Saul's son Jonathan, was David's very best friend. Saul was trying to kill David when Jonathan heard about it and went to inform David that he needed to run for his life.
But in chapter 23 and verse 16 we read:

That's what Katie May did. That's what Wade Douglass did.
They shared their faith and hope in Christ and loved others well.
I want to be like them. I want to be like Jonathan.
I want to encourage others to stay strong in their faith in God. Whatever happens to them, whatever might turn their world upside down.
Over three years ago, I joined the Young Life College staff because I wanted to encourage college friends that a relationship with Christ lasts for a lifetime. That life doesn't make sense apart from Christ. That we need Jesus everyday. That the more connected we are to HIM, the more we will be able to handle what life on this earth might throw us.
One of the greatest joys in my life has been encouraging Amy to stay strong in her faith. We've walked some pretty crappy roads together. But I am confident Amy's faith will stay strong in the weeks and years ahead because she wants to be reunited with her earthly father and her Heavenly Father forever.
Its not because of me, its because of the example of her dad.
Love deeply, forgive freely.
Thank you Lord God, for Wade's life and how You are using his life and Katie's life to want me to be a better lover of people.
Posted by Missy's Musings at 10:52 PM