Last Wednesday was simply amazing. And different.
I took my two grandsons to the beach.
I have not been to the beach for eleven months and for someone who spent her summers at the beach, this was way overdue.

We arrived a little afternoon and those two immediately began having a blast. 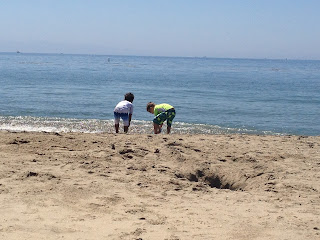 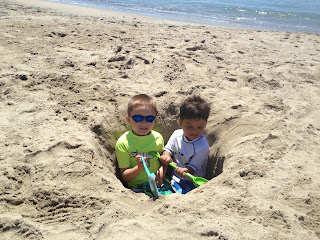 Kellen and Jax collected buckets and buckets of sand and water and dug deeper into a hole that was already there. They played chase with the waves and squealed with delight. We collected shells and learned how to "pop" seaweed with our feet. Jax ran after seagulls and we tried to eat a sandy lunch.
We were joined by Kristin (Ryan's girlfriend) and Kim (her mom) later in the afternoon and had just a marvelous time!!

I was so glad to hear that the boys' mom had continued the tradition I had begun with her and her siblings on our beach days: a stop at Marianne's Ice cream in Santa Cruz on the way home. This ice cream parlor is a longtime tradition in Santa Cruz. I remember going there with my dad when I was a child. The building remains painted red so that you can't miss it as you begin your way to the freeway on the return home. I was taken aback by the prices though. I paid over $9 for 3 cones and got less than the kids scoop at our beloved Collins Lake, which costs only $1.50.

I was at the stop light just before the entrance to the freeway when the text came in. I read "not good news on your biopsy" and the pathology report was included which I didn't have time to look at but did see "very suspicious for follicular neoplasm".

And the light turns green.
Whoa.
Get it together Missy, you have your two sweet little boys in the car.
Call Woodleaf and tell Scud and ask him to call our doctor because I know his office will be closed by the time we get home.
The drive home over the Santa Cruz mountains was no match for me. I had Kellen asking me questions about my mom and dad and gave him some family history. His sweet spirit and inquisitive mind about so many things kept my mind off the news I had just received.

After cleaning our sand toys and washing the wagon, we headed inside to take showers to get all our sand residue off us.

It was then while the boys were playing, that I had time to comprehend the news.
Neoplasm= tumors=cancer.

Its that "C" word.
Cancer. It can scare the hell out of anyone who hears it.
As the tears rolled down my face, I remember telling my daughter on the phone the news and then Todd came home from work, saw me crying and he knew. I kind of fell into him cause I just needed a hug. I remember between talking to Kristi and seeing Todd that I fell on my knees beside my bed and told God I knew He was there and that He was in control.

As the late afternoon and early evening rolled on, I talked to my doctor at home and he had contacted his doctor friend in Chico who said he would see me the next day.

That required the 3 1/2 drive home to Woodleaf. I'm sure my kids were nervous; they knew how I used to hate to drive at night, plus receiving the news I just had.

That drive- with just me and God and KLOVE radio for 3 1/2 hours was exactly what I needed.
In my nursing mind, I know that thyroid cancer is the BEST cancer to get, because it is usually containable. But honestly, hearing the word cancer is frightening, no matter what type it is, no matter how old you are, no matter what the prognosis is.

Oh, there were tears. Not sobs, but tears.
There was fear. But not the kind that takes hold of your life and you can't move.
But there was a time of thanksgiving and release.

I knew God was there.
I knew I would be OK-no matter what, (see my previous blog on you will be ok).
I knew that it was scary, because alot of the unknown is.

But I knew I was OK.
I had such an incredibly sweet time with Jesus that drive home. And the words on the songs that night were just for me.
I wish I could remember the name of the song and the exact words, but what I do recall is that it talked about this life is not our true home. We are just passing through. That our real home is the one we will spend with God in eternity.
BAM.
This is just another bump in the road of life here.

Thursday morning I had an appointment with my new ENT (Ears, Nose and Throat) doctor in Chico.
This young man was thorough and gave us statistics and odds-which were all in my favor.
90% of thyroid biopsies that say they are suspicious for neoplasms are cancer. The fact that I had two different cells identified is a good indicator that it is cancer.

So sometime early in September I will have my thyroid removed and wait on the pathology report to see what happens next.
My fear is gone.
Replaced by God's peace.

Yes, I still can get teary. And yes it still is a bit scary. But I think anyone who has cancer gets a bit scared.
My outcome fares better than so so many (90% cure rate in thyroid cancer).  I hurt for those whose cancers are not that high.
I wonder how come I have thyroid cancer when I have a friend who is battling one of the most awful cancers. I've had a "cancer prayer list" for years now. Do I add my own name to that?

All that I do know is that I am not alone.
I have a GOD who is upholding me.
I have a husband who loves me and is with me.
I have children who I know are praying for me and love me.
And I have such good friends who are calling and checking in and praying too.
I am being held by Jesus and by His saints who surround me.

That is what is the biggest blessing is to me right now.
So although this news can be awful, I also know that the best news for me, right now in this time, that I am not alone.
And I never will be.

Email ThisBlogThis!Share to TwitterShare to FacebookShare to Pinterest
Labels: Cancer