No news is GOOD NEWS-except for ONE

February 1st marks the start every year in the United States of Black History month.

I care deeply about racial reconciliation between Blacks and Whites in the US.
I don't pretend to understand anymore what my Black friends have endured. For awhile, I thought I knew; but in reality, I have no clue of what it is like to be targeted by police because of the color of my skin. I have no relatives that were slaves. I can't fathom the injustice of having "white bathrooms" compared to "Colored bathrooms". Or faucets that were ear marked for Whites or Coloreds. Or that Black citizens were not allowed to vote or enter a public university. 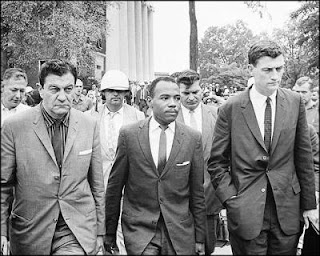 Growing up in California, all this was mind boggling to me. Why did the South mistreat Black people because of the color of their skin? Why did slave owners basically rape the Negro women on their plantations? How did Christian churches go along with this?

And why for the love of anyone is this still an issue?

Recently I began reading, "Between the World and Me" by Ta-Nehisi Coates.http://www.amazon.com/Between-World-Me-Ta-Nehisi-Coates/
For a white woman, this book has been very hard to read. I can't even begin to explain the guilt, the pain, the outrage I have experienced in this book, and I am only half way through. It really opened my eyes to see that " I just didn't get it". I thought I did, but no, I don't.
My heart breaks and aches as I read the pages, and am reminded once again of all the evil in the world.

I need to remember that there is evil in the world, because right now, the world is the domain of the enemy of God. As my heart ached this weekend of reading of Boko Haram's latest ambush of a village in Kenya that took the lives of 86, to reading of a Virginia Tech student who killed a 13 year old girl that he met online and preyed on her broken heart from  the bullying she received at school because she was a little overweight and had scars on her body due to a liver transplant. I am aghast at what goes on. Imagine surviving a liver transplant (which is the hardest transplant to endure), only to be bullied at school for the marks it left on your body, and then losing your life to a sadistic and twisted individual.
I read this morning of a Taliban suicide bomber killing 20 people at the police station in Kabul.
So in case you might be disagreeing with me about the evil in our world, these are just three brief stories of what happened over our weekend.

BUT THEN...
I began reading the book of Romans this morning. This book in the New Testament is the gospel wrapped up in 16 chapters.
Even with all the evil in this world, there is HOPE.
There is ONE who came to set us free from the lies, the distortion, the accusations that we are never enough, that we will never amount to anything, that our life is hopeless.

The devil has been after us from the time Adam and Eve were the first to be seduced into his lies. To believe that they could become just like GOD. That God was holding out on them. And he has been after us humankind, distorting the truth, ever since.

There is so much just in the first chapter of Romans that I was overwhelmed this morning.

"Through Christ, God has given us the privilege and authority
... to tell Gentiles everywhere what God has done for them so
they will believe and obey Him, bringing glory to His name."

How great is that? We, who know and believe in Jesus, get to tell others about Him. To share with them that there is HOPE. That things can be DIFFERENT. That we are LOVED and CHERISHED by the God who pursues us, desires us and loves us wholly beyond our comprehension. We have the privilege of sharing this GOOD NEWS.
Yet, I wonder why we don't do it more. Is it because we are afraid of how people will respond or how they will then perceive us? This news That JESUS CHRIST came to earth, to die for us, so that we can be restored into the relationship with God the Father, that we were always meant to have, is THE BEST NEWS we could ever tell anyone.

For the Black population in America, this news transcends the crushing blow of racism. JESUS came to save all of us; skin color was never even considered.
For the Nigerians, that have been brutalized, been killed and lost family members due to the atrocities committed by Boko Harem, can be comforted by the words in Romans 2:2

" And we know that God in his justice will punish anyone who does such things."

The horrific acts committed by those who murder others WILL NOT GO UNPUNISHED.

There is a GOD who cares deeply for us, so much so that He sent His Son, His Precious Son, to take our place, for paying the price of all the things we have done wrong, so that we might know again of His love, His compassion, His mercy, His forgiveness, His un-ending Grace, to all those who believe in His Son.

My prayer is that evil will be obliterated. That racism would end. That injustices that are being committed all over our world would be done away with. That is written knowing that the chances of this happening in my lifetime are miniscule, but knowing that with Jesus, there is ALWAYS HOPE, and that we each are given the opportunity and privilege of telling others, telling anyone, telling everyone of this Hope.